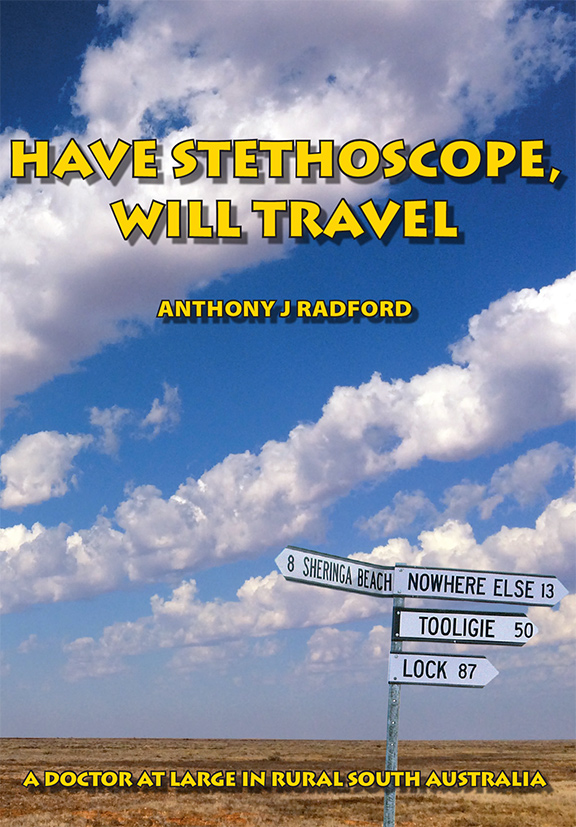 Have Stethoscope, will travel: a doctor at large in rural South Australia.
Anthony Radford. Openbook Howden, 2018. Available at Anthony@radford.id.au or yourbooksonline.com.au

Tony Radford was the foundation Professor of General Practice and Public Health at Flinders University. Before that he was a solo medical practitioner in Papua New Guinea and after it he spent 15 years as a country locum GP. In short, he is an academic who can walk the talk. He seems to cope with emergencies with the same coolness of mind that he had in PNG more than three decades before. He wrote about his PNG experiences in an earlier book, Singsings, sutures and sorcery (2nd ed. 2015)

If I was looking for an informative tour of South Australia I would ask Tony Radford and his accomplished wife, Robin, to be my guides. I would enjoy their clarity of thought, their modesty, and Tony’s pithy sense of humour that is immune to the modern disease of political correctness. Their guidance would improve my knowledge about South Australia from its health services through to its sociology, history, geography, gastronomy and oenology. That would hold true even for places where I had previously worked or visited. As a bonus I would also learn about old, abandoned and still functioning rural Anglican churches that Robin is documenting.

In short, this book is a top of the range medico-academic version of TripAdvisor. I would back myself or any other diligent reader of this book to win any trivial pursuit type quiz on South Australia. Try these three questions as examples of what you might learn:

Which town in South Australia:
a) Is named after the winner of a Melbourne Cup?
b) Was known to the Russians (during the Cold War) as ‘the arsenal of the South Pacific’?
c) Translated from Yankunytjatjara, means ‘white man in a hole’?

This book is divided into 20 sections, with accompanying maps and a 30-page collection of photographs. This makes for easy reading and referencing. I recommend it to practising or intending locum doctors, medical students on rural secondments and young doctors looking for off-the-beaten-track experiences. It would also come in handy as a travel guide for grey nomad doctors and nurses exploring the many wonders of South Australia.